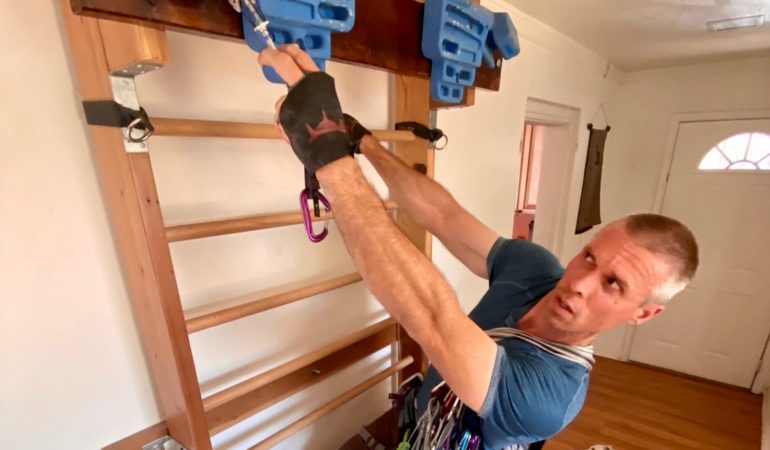 Chris Adams on the first ascent of “Rio Salado Blues,” a 5.2d+ located high on the Mesa plateau. Photo by Tina Leaman.

Thanks to all who logged in for our second AMC Online Skills Clinic on July 2. It was wonderful to chat with so many climbing friends! The event featured the incredibly knowledgeable David Sampson (who is certainly not a gear-head at all…) talking about all things related to belay and rappel devices. Who knew there were so many different options out there?

But before you rush off to the Hiking Shack to pick up some new gadgets, you might want to know that our next online event is scheduled for July 22, when Chris Adams will discuss building a trad rack. So maybe hold off on that shopping spree for a couple weeks…

We’re still sticking to online events, of course, because COVID-19 cases in Arizona are rising fast. Even our local climbing gyms have been ordered closed again until at least July 27. In this AZ Central story, you can hear the frustration from Joe Czerwinski, owner of Focus Climbing Center in Mesa, who was arguably doing everything right to maintain a low-risk environment and is now hit with a second shutdown.

On the up side, at least some of the literal fires are being put out. The Bighorn Fire, the Bush Fire, and the Magnum Fire are all fairly well contained at this point. Unfortunately, we now have the Wood Springs 2 Fire spreading near Ganado and the Polles Fire near Payson.

While we’re on the topic of lightening, do you know the safest place to be during a thunderstorm? Answer: Indoors! However, if (when) you find yourself out in the elements when the sky starts flashing, you’ll need to know Climbing magazine’s Laws of Lightning.

Unfortunately, our options for outdoor recreation have gotten more constrained. As of July 2, most of Tonto National Forest is closed due to fire danger, except around the lakes. (Note: Do not go to a lake during a thunderstorm.)

Wherever you go, remember to be careful because SAR teams continue to see higher-than-usual demand for backcountry rescues, which puts everyone at risk.

Sadly, the SAR team at the Grand Canyon has had to deal with two fatalities in recent days. One hiker died from heat exposure on the South Kaibab trail on June 26, and another visitor fell while taking photos near Mather Point on July 3.

So, with an excessive heat warning in the forecast for the next several days, this seems like a good time to remind ourselves of the symptoms of heat-related illnesses and to remember our strategies for safe summer recreation in the Grand Canyon State (and in the canyon itself).

For backcountry trips any time of year, you might know about satellite communication devices that allow you to call for a rescue or send messages even if you don’t have cell phone reception. The market leaders are Garmin InReach and SPOT. But now there’s a third option: the ZOLEO Satellite Communicator.

And if you think that you’re so careful that you don’t need no stinkin’ SatComm, here’s another discussion of how we evaluate risk—and why you’re probably not as good at it as you think.

Well, let us introduce you to one of the most entertaining travel companions around: Daniel “Blackalachian” White had barely stepped foot on a trail before April 2017, when he set off (somewhat impulsively) on what became a thru-hike of the entire AT. One of only a few black hikers to ever complete the trek, Daniel went on to bicycle the length of the Underground Railroad in 2018, then hiked across Scotland and Spain last year, spreading “love and light” along the way. Listen to his recent interview on the Out and Back podcast or follow along on his Instagram feed or YouTube channel to see where he’s been and where he’s going next.

Since we clearly won’t be going to Europe for a while IRL, perhaps you’d enjoy daydreaming of a hut-to-hut hike in the Dolomites?

Or let’s go to a slate quarry in Wales, where Hazel Findlay recently worked out the classic Quarryman Groove pitch of the four-pitch test piece, then returned last week to finish the whole thing.

If Wales is still too warm for you, how about some glacier travel? Uphill Athlete Iain Kuo was disappointed to learn that Denali was off limits this year, but cheered up with a ski traverse of the Wind River Range instead.

You say you’re a climber, not a skier? Well, this article argues that rock climbing can help your skiing, so we [or at least Ann] figure that logic should go both ways.

By the way, if you use the Tracker2 avalanche transceiver when traveling in avalanche country, there’s an important software update out now.

No avalanches, thank goodness, but plenty of snow in Patagonia, where Alex Honnold and Colin Haley teamed up again this spring to send some big routes before coronavirus shut things down.

A group of leading climbers in British Colombia are excited to share some of their great bouldering FAs in a new short film. And they found a way to help fight racism at the same time. Win-win!

Not exactly a first ascent, but here’s a climbing record worth noting: Spanish climber Javier Aguilar just bested his own hardest grade and became the first blind climber to lead 5.12d. You read that right. He led a 5.12d. And he’s totally blind.

Want some more stories about people doing great things in the outdoors? Well, if you missed the No Man’s Land Film Festival when it came around this spring, fear not! There are still virtual screenings available of the festival, which celebrates adventurous women. Next showing on July 16 is hosted by The Mountaineers.

If, however, you’re feeling like your muscle tone has, um, de-toned due to a glut of coronavirus screen time, take some inspiration from these senior athletes, who know all about regaining lost fitness.

And, writing for Rock and Ice, Neil Gresham has some climbing-specific information about how to get stronger as you get older.

However, since we’re locked out of the gyms again, perhaps you’re ready for a new at-home workout/DIY project. If so, competitive climber Nina Williams has instructions for building PVC paralettes—and a training program to go with them.

You know who has NOT de-toned during lockdown? Our very own Rebeca Rodriguez, who has been kicking it on her own pull-up challenge.

Out on the rock, there have been some interesting discussions going around about route names, including the news that developers have renamed several climbs in Ten Sleep Canyon, Wyoming to address concerns that they trivialized slavery.

The topic of misogyny in route names was also covered in a Rock and Ice article in February, which took a closer look at the issue with a focus on a particular route in Monterrey, Mexico.

Partly as a result of those articles, Mountain Project has also started a list allowing climbers to flag discriminatory climb names, with a plan to review the list and potentially reach out to first ascentionists to ask if any of them would consider name changes.

Locally, the Arizona Women Climber’s Coalition (AZWCC) is hosting a virtual town hall at 6 p.m. on July 9 as an opportunity for a panel of developers to discuss route names, particularly those that are offensive or degrading. AZWCC is urging anyone with an interest in this topic to join, and has even created an online form for suggesting routes that might be considered for name changes.

We mentioned in our last post that the Bureau of Land Management is accepting public comments until July 9 on proposed oil and gas leases around Moab. The acreage under consideration is valuable for climbing, hiking, and other outdoor recreation, which are threatened by the leases. If you’d like to submit a comment and want some help, check out the Access Fund’s letter writing tool.

As we move into another week of metaphoric and literal fires (fiery forecast included), we think we should close with some Fire Art. Not art ABOUT fires. But art made WITH fire. Artist and guide Shauna Liora uses some unusual techniques to produce paintings that celebrate the outdoors and the outdoor life.

So stay cool, stay safe, and we’ll see you online.

1 thought on “Climbing in a Time of Coronavirus, vol. 15”