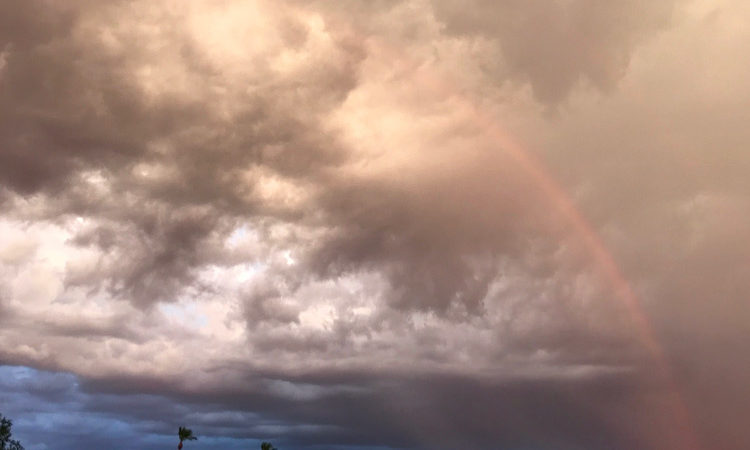 Monsoons are coming! (We hope.)
photo by Rebeca Rodriguez

It’s been great seeing so many of you popping into the AMC online skills clinics. We’ve had some excellent ones so far, and we’ve got more coming up. Bonus: the August member meeting is moving online, too. So make sure that you’re signed up to receive announcements and messages regarding our MeetUp events.

Oh, and make sure your membership is up to date! If you’d like to join or renew, your timing is perfect: you can get a membership for the rest of 2020 for just $20 for an individual or $25 for a family.

We’ve been so busy with clinics that we’re a little behind on our news, so let’s catch up!

First of all, the big headline this week is that the U.S. House has passed the Great American Outdoors Act, which includes funding for deferred maintenance on public lands.

Meanwhile, the Access Fund and partners have wrapped up arguments in a federal lawsuit challenging proposed changes to Bears Ears National Monument in Utah, which would affect access to parts of Indian Creek and other climbing areas.

Closer to home, the Access Fund also has an update regarding ongoing threats to Oak Flat.

The southern end of the Arizona Trail is closed for border wall construction.

It’s for a different reason, but local climbing gyms will stay closed for a while longer. How much longer? Who knows? But the governor’s order will be reviewed again in two weeks.

In happier local news, congratulations are in order for the Arizona Women’s Climbing Coalition (AZWCC), as they have recently completed the process of becoming a 501(c)(3) registered public charity, which means that donations to the organization are now tax-deductible. Formed in August of 2018, the group has been hosting climbs, clean-ups, and other events intended to connect and empower women through rock climbing.

And we send condolences to those who knew pioneering dirtbag climber Mark Powell, who partnered with Warren Harding for early attempts on the Nose.

Speaking of pioneering climbers, Piolets d’Or list of significant 2019 ascents is out and chock full of fuel for your quarantine daydreams. And the 2020 Piolet d’Or Lifetime Achievement Award goes to Catherine Destivelle. The French climber is a leading alpinist, a champion sport climber, and the first woman to receive this honor since the award was created in 2009.

Meanwhile, John Roskelly, the first American to receive the Piolet d’Or Lifetime Achievement Award, is running for the Washington State Senate on a platform that stresses conservation and stewardship.

We can never forget that climbing is a dangerous sport, and sometimes even a fatal one. Many climbers have lost family and friends to the mountains, including John Roskelly, whose son Jess Roskelly and partner Willi Unsoeld both died in avalanches forty years apart.

But climbers rarely talk about what that means for the people who survive. So the American Alpine has created the Climbing Grief Fund is an attempt to connect climbers with mental health resources to help process those losses and the new film 1,000 Ways to Kiss the Ground is both an exploration and a fundraiser.

Sometimes, however, even a tragedy can be an inspiration for growth. As recounted in this month’s issue of Alpinist, in 2002, climber Craig DeMartino fell a hundred feet from the top of a pitch. He survived, but his injuries were so severe that he eventually had to have his right leg amputated below the knee. But he kept climbing, and turned the experience into an opportunity to work with, and help, other people who have suffered trauma.

And in South Carolina, the Carolina Climber’s Coalition saw an opportunity to help climbers who have lost their jobs during the pandemic: by offering them jobs building climbing trails.

Of course, COVID-19 has forced a lot of changes. And it may have some interesting repercussions for backcountry skiing, too.

But even though the coronavirus impacts on organized climbing continue, we have rounded up some more great tech tips to help you gain skills and confidence right now.

For starters, if this video doesn’t convince you to color code all of your trad gear, it should at least transport you to Wales with Jez’s delightful accent.

But if you’re buying new gear, how do you know if it’s safe for climbing? You look for the UIAA rating, that’s how.

In case you’ve ever worried about falling into one of the many famed glaciers of Arizona, the UIAA has some tips for how to extricate yourself from a crevasse.

Have you ever stuck a rope climbing or canyoneering? Well, if you haven’t, you almost certainly will at some point! So let’s learn how to get a rope unstuck—and how to avoid sticking it in the first place.

Speaking of things going wrong, do you know what “benighted” means? Hopefully you’ve never had to learn in person, but you’ll be ready once you learn how to survive in (relative) comfort.

Most of us already know a thing or two about recreating in the heat, but if you’re new to Arizona, or looking for a refresher course, Outdoor Research has some ideas (and some gear suggestions).

But you don’t need any skills to go armchair adventuring! (Except maybe mastery of the remote.)

Dreaming of the REALLY big peaks? Adrian Ballinger talks about what to expect above 8,000 meters.

Oh, here’s a big question about a big peak: Did Mallory and Irvine actually summit Mount Everest or not? An investigative reporter named Archie Price Siddiqui just produced a new documentary about this for a school project, with a little help from the British Mountaineering Club, the Alpine Club, and the Mountain Heritage Trust.

Those of us who use our outdoor time to seek out peace, rather than to conquer peaks, know that natural quiet is increasingly hard to find. But science says it’s good for you.

Hey, we learn a lot about our world thanks to all those hard-working researchers. So why not help them in return? The non-profit Adventure Scientists empowers ordinary citizens to gather data on major health and environmental issues while out biking, hiking, diving, or skiing.

Or here’s another way to make yourself useful: A team of Romanian researchers is seeking climbers willing to participate in a study about the psychological makeup of climbers. Wow, they’re brave.

But if your primary psychological challenge is feeling sad because the climbing gyms are closed, then it’s time to redouble your home training.

Meanwhile, our own Rebeca Rodriguez is still providing inspiration and pursuing her own #lockdowngoals.

And, although we know it’s been a frustrating summer, the good news is that the number of new coronavirus cases in Arizona is finally trending down. And the wildfires are pretty much under control.

What’s more, even as we write this, the monsoon clouds are (finally!) building over the Valley.

So AZDOT has a reminder to get your vehicle ready for the storms.

Lastly, here’s some interesting science: We know that rainstorms in the desert smell like creosote bush, but what’s that smell BEFORE the rain starts? It’s called petrichor.

So stay safe, stay out of washes, and please tell us what you’re doing with yourselves.

Isolate on!
Ann and Andrea

8 thoughts on “Climbing in a Time of Coronavirus, vol. 16”