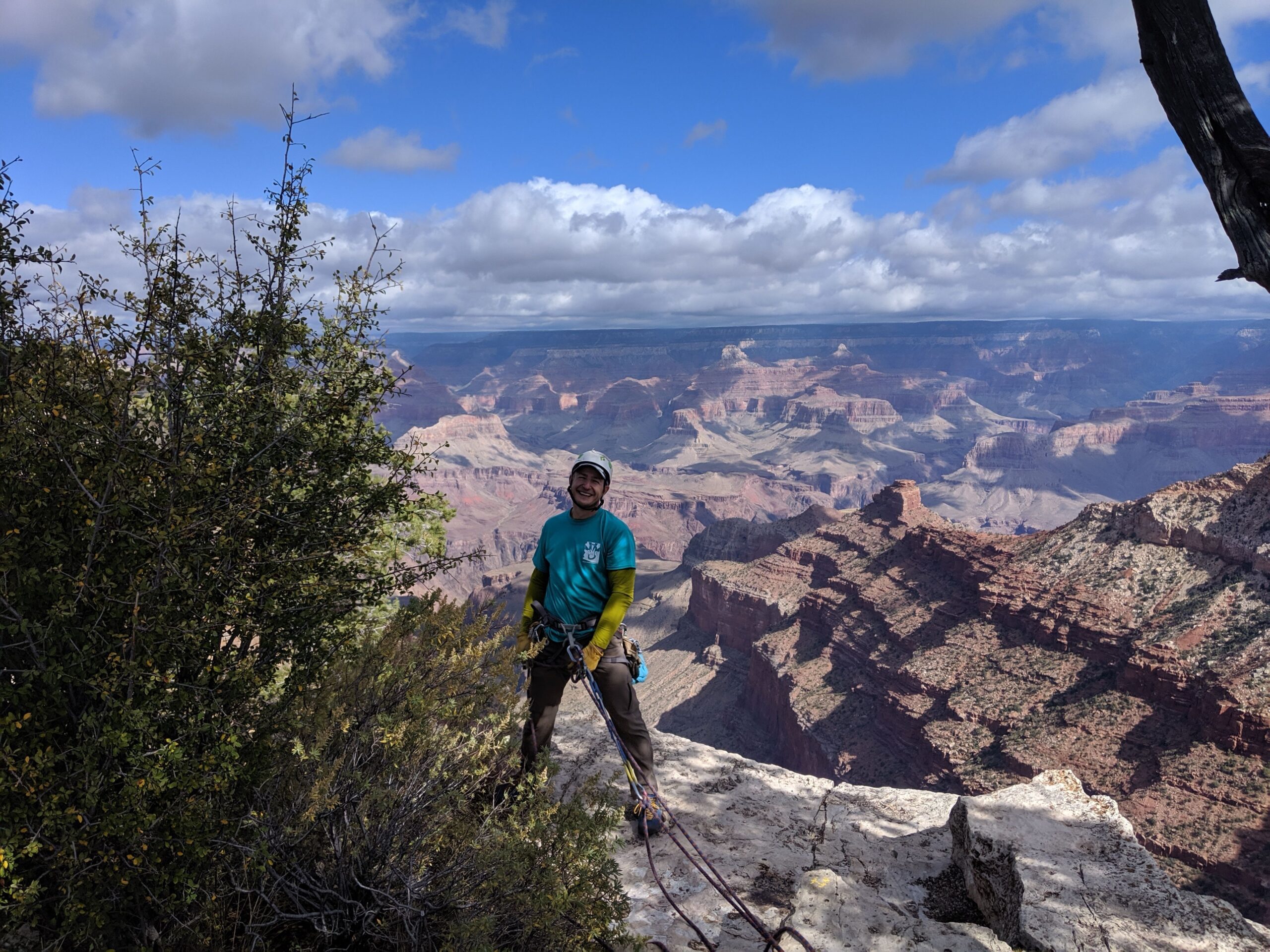 How are you doing out there in cyberland? We’re guessing a lot of you have been indoors lately thanks to what feels like a never-ending extreme heat warning in Phoenix.

So don’t forget that we’ve got several online events coming up that you can enjoy from the air-conditioned and socially-distanced space of your choice. Next up is the AMC Member Meeting on August 26, with a special presentation about the history of the Grand Canyon Clean-up, which the club has been performing for more than 30 years.

But we’ve also got a big round-up of news for you right here right now—and some of it is even good!

First of all, we’re happy to report that as COVID-19 community spread continues to decline in Maricopa County, most of our local climbing gyms are opening back up again for actual, in-person climbing. Remember that?

Ape Index and Focus Climbing Center have both reopened with limitations on the number of visitors and several other safety precautions that you’ll want to know about.

AZ on the Rocks is open for members only, with day pass admissions coming soon. Register in advance for an available time and take note of safety requirements.

In addition to keeping track of COVID-related closures and re-openings, we’re also paying attention to the impending construction of two new gyms in the Southeast Valley: Arches Climbing in Chandler and Alta Climbing in Gilbert. Both aim to be large gyms with tall walls and lots of great features, and are planning to break ground soon.

Since most gyms, like other places, require you to wear a mask, and since we know it seems super-convenient and cool to use your stretchy neck-gaiter (a.k.a. Buff) as a face mask, we took note of this new study from Duke University, which suggests that some of those gaiters might not work as well as a cotton or surgical mask for reducing the spread of COVID-19. Indeed, depending on the specific material and fit, they might even be worse than no mask at all.

But, as with all evolving science, there are still a lot of unknowns…

Outside the gym, PRG owner—and former AMC president—Paul Diefenderfer put his rappelling skills to great use recently when he volunteered to help Southwest Wildlife Conservation Center by rescuing a bobcat that had fallen into a mine shaft—and onto a cactus. Poor kitty! Luckily, she’s on the road to recovery and a probable release.

And here’s a climbing accident with a happy ending: a climber survived a fall into a crevasse at Grand Teton National Park on August 9.

Speaking of great rescues: Following thousands of public comments and a review process, the Bureau of Land Management has cancelled plans to auction oil and gas leases on 85,000 acres of land near Moab. This is fantastic news for climbers and everyone who loves the outdoors, so if you were among those who submitted comments, we thank you.

However, public lands still face other threats. With not much recent rain to lower the fire danger, there are multiple lightning-caused fires burning right now in Arizona, including the Superstition Fire near Hog Canyon, and the Salt and Meddler Fires near Roosevelt Lake. So Coconino, Kaibab, Prescott, and Tonto national forests have reinstated fire restrictions. Know before you go!

You might already have noticed this, but going outside makes you happier. It’s true! (Okay, maybe not going outside at this second…) And that’s just one explanation for why visitation to our national parks has gone up since COVID-19 hit.

However, wherever we go, let’s make sure we know what we’re getting into. A Moab business owner shares a sobering story about what happens when we aren’t prepared for remote adventures—and why we need to be honest when assessing our abilities.

Even closer to home, it appears that a young man has died on a Tucson portion of the Arizona Trail of what seems to be heat-related causes.

But sometimes bad things happen in the outdoors, even with training and preparation. And for survivors, we need a way to process the trauma afterwards.

You know what can help keep you safe? A partner who isn’t afraid to nag you about safety. Because, as Owen Clarke points out: “A team made up of a reckless climber and a safe climber isn’t much safer than two reckless climbers.”

When you’re being safe but just getting frustrated, Alannah Yip offers a reminder that challenges are an opportunity to grow. And that smiling is a secret power.

While Alannah Yip is (rightly) being encouraged to pursue climbing as a career, that has not always been the case for women. While women have been involved in climbing and mountaineering since at least the mid-1800’s, they didn’t always promote their accomplishments. As this history of alpinist Lucy Walker points out, it wasn’t considered lady-like. So she “would walk out of villages looking every bit the proper lady and then stash her petticoat behind a rock.”

But if you’re looking to do more alpine climbing here in 2020, MSR has some tips for beginners. These include using shorter “dates” to build a relationship with your partner, and also knowing when not to cry.

If you’re ready to commit to the really big peaks, you might be curious about how hard is it to climb an 8000m peak without supplemental oxygen. Spoiler: It’s pretty hard.

Regardless of height, a previously-unclimbed peak sure sounds like a good place to avoid a global pandemic, doesn’t it? That’s what this Czech team decided about Muchu Chhish.

You don’t have to climb a giant mountain to get a workout, but new research suggests that stressing the body by doing a hard workout, fasting, or getting cold (the last one is kind of a challenge in Arizona right now!) may have anti-aging effects on our cells that can actually help us live longer. [Editor’s note: we do not, however, recommend doing a hard workout while fasting and being cold.]

Stretching is definitely good for us at any age. And Gripped says it may help us climb better, too!

And Outside magazine suggests some simple (and relaxing) exercises to help prevent climbing and overuse injuries.

If (or when) you do get injured on a climb, the Uphill Athlete podcast interviews physical therapist Pete Dickenson about how to help yourself recover faster and better. And how to prevent some injuries in the first place.

But let’s stop talking about injuries and talk about climbing!

Despite all this year’s challenges, this summer has seen the first ascent of “Gambler’s Fallacy,” a new 5.13b on Longs Peak in Colorado, and a second ascent of Box Therapy V16 (!) in Rocky Mountain National Park. Both have videos for your vicarious climbing enjoyment.

And two Canadian climbers have completed a new 5.11X in the Valley of the Ten Peaks near Lake Louise. But if you’re interested in trying it, we will point out the X in the rating and recommend that you bring your most safety-obsessed partner along.

Over in Italy, Polish climber Lucasz Dudek has skipped the partner entirely and taken rope-soloing to the next level, with a free ascent of the 5.14b “Pan Aroma.”

But a team is still the best plan for the big peaks, and the Piolet d’Or mountaineering awards coming up in September will recognize four climbing teams for their significant first ascents of 2019.

The new Patagonia-sponsored film “Stone Locals” premieres online on August 27 and features the stories of five climbers who each take their own path to build community through rock climbing.

And longtime climbing videographer Samuel Crossley’s new 31-minute film is available for free viewing August 26 through August 28 as part of the online Arc’teryx Climbing Academy. Free as Can Be chronicles the shared quest to free climb Free Rider that unites Mark Hudon and Jordan Cannon across a generational divide, and the partnership they forge along the way.

If you need an excuse to buy new gear, Wild Country has updated the product lifespan estimates for their climbing gear. They recommend replacing metal goods every 10 years, and products with textiles based on usage. And, in related news, Wild Country is adding a sling-replacement service.

For a few other climbing-related problems, Climbing has compiled another list of quick climbing hacks.

Way more than a hack, this is a beautiful solution to a serious challenge. Most hiking trails are not wheelchair-accessible, so a group of friends carried their hiking partner—and his wheelchair—to Grotto Falls near Canmore, Alberta.

For another wheel-based adventure, perhaps you’d like to head out on a weeklong bike-packing trip in the mountains. Sounds nice, right? Oh, you’ve never mountain biked before? Or even been camping? Well, Analise Cleopatra didn’t let those pesky facts stop her.

Whether hiking, climbing, or wheeling, we’re really hoping to never get this close to a bear!

But if you do, should you run or should you stand? It’s an old debate, as singer Corb Lund explains in his musical recap of conflicting advice called “Grizzly Bear Blues.” [Hey, Sasso: wanna add this to your repertoire?]

But at least now we know how to outrun a dinosaur.

Which leads us to the wonderful recent discovery of the oldest-known footprints at the Grand Canyon. You knew you weren’t the first to hike Bright Angel Trail, but did you know that tetrapods were strolling through the area 313 million years ago?

2 thoughts on “Climbing in a Time of Coronavirus, vol. 18”