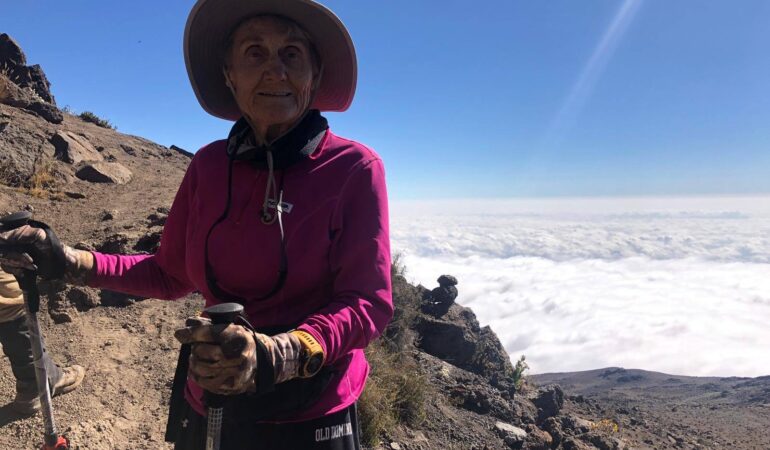 Anne Lorimor, the oldest person to summit Mount Kilimanjaro, will be the featured speaker at our Sept. 16 member meeting. Don’t miss it!
photo: Anne Lorimor.

We’ve got another update from the outside world—or at least what we can share of it through our screens.

We had a great turnout for our August AMC member meeting where Scott Kuchman, John Furniss, and John Gray gave us a fun and fascinating history of the Grand Canyon Clean-Up (in retrospect, we should have recruited another Scott just to even things out!). The AMC has been organizing this amazing stewardship event for more than 30 years, which is about one-third of the 100 years that the Grand Canyon has been a national park. Pretty cool, right?

And in related news, we have just received word that this year’s Grand Canyon Clean-Up will be going forward. Yes! Live! And in-person! However, in order to stay safe and comply with the stringent NPS requirements due to the COVID-19 pandemic, the clean-up will involve only a small team of experienced trash-rappelers and a lot of masks. [Let’s imagine a masked Over-the-Rim strike team.] By now, everyone who is going should be confirmed and busy packing their PPE. So we’ll have to wait another year for the next GCC potluck dinner extravaganza. On the up side, you’ll have plenty of time to perfect your chili recipe…

For those of you keeping track at home (where else?), the clean-up will mark the AMC’s first in-person activity since March, when we had to cancel our Spring Basic Outdoor Rock Climbing class after just two classes. Since then, the board and AMC leadership has been working to develop a plan for restarting more AMC activities once relevant local, state, and federal guidelines indicate that we can do so in a safe and responsible way.

However, we still have virtual events happening for AMC members, so check the schedule on MeetUp. Tom Seeley just did a great Introduction to Canyoneering in Arizona on September 7. Next up, Erik Filsinger is leading a virtual outing to Red Rocks, Nevada on September 15.

Definitely plan to join us on September 16 for a very special member meeting (note that it starts at 6 p.m.) that will feature the amazing Anne Lorimor, as she discusses her experience as the oldest person to have summited Mt. Kilimajaro.

For more great online events, the American Alpine Club has announced that their popular Craggin’ Classic Series will be hosted in a virtual format this year. Registration opens September 15 for the series, which runs October 19-25 and includes interactive educational clinics, workshops, films, games, and even an online auction.

Did you miss the Arc’teryx Digital Academy in late August? Well, good news! The event included a very timely panel discussion about diversity in the outdoors called “Being Welcomed is Not Enough,” which was moderated by Shelma Jun of Flash Foxy, and is now available online.

One way to raise awareness of diversity in the outdoors is to promote the stories of more people. Kristina Ciari is doing just that by writing articles highlighting outdoors people of diverse backgrounds for Wikipedia. Read on to find out more about her project — and how you can help.

“What country are you from?” “Earth!” That’s the excited reply from a group of students heading out to the mountains to explore climbing for the very first time, as shown in this video that documents the work that several Chilean climbers are doing to bring climbing and stewardship opportunities a group of migrant students in Santiago.

But respecting diversity in climbing also means respecting diverse ways of managing land. And sometimes that means not climbing on it. Dr. Len Necefer, who is a climber, member of Navajo Nation, professor of American Indian Studies at the University of Arizona, and founder and CEO of the Tucson-based Natives Outdoors, reminds non-native climbers that climbing is not allowed on Navajo Nation, including the iconic Shiprock and Monument Valley formations. He has hopes that someday that rule will change… but only if everyone cooperates.

For a more thorough understanding of the history of outdoor recreationists on native land, Natives Outdoors has also compiled an extensive reading list about tribal sovereignty and public land.

For example, in the Canadian Rockies, there are prominent plaques around Lake Louise that highlight the early mountaineering history of the area. What’s missing, however, is the history of the indigenous groups who used the land long before climbers arrived, but who were were barred from accessing the land after the creation of the Stoney reserve in 1877. That history is now being acknowledged, and that lack of access is starting to change, thanks to a pipe ceremony held this year.

Whenever you’re out exploring, you can also learn about the traditional ownership history of the land that you’re on. Want something more portable? There’s an app for that.

And remember that on any lands, you need to pack out whatever you pack in. That includes your banana peels and apple cores.

By the way: did you know that the National Park Service offers a special pass that will waive the entrance fee to federal parks for every fourth grader in the U.S. (and their families!)? If you don’t have a fourth grader, maybe you could borrow one?

If your national park plans include a Grand Canyon hike in the near future, be aware that the Silver Bridge along the Bright Angel Trail is closed due to structural concerns. There’s no estimated time for repairs, so hikers will need to cross via the River Trail and the Black Bridge, which will add about 1.5 miles.

In better news: a few more recreation areas have reopened on Mount Lemmon, although the photos in this article show just how devastating this summer’s Bighorn Fire has been.

While Arizona is having a temporary reprieve from major wildfire activity, we can see from the hazy sky that California is dealing with a rash of serious wildfires that are wreaking havoc across the state.

Among other issues, more than 50 hikers, many of whom had been trekking on the John Muir and Pacific Crest trails, had to make an unexpected bivvy at the Vermilion Valley Resort in California due to the nearby Creek Fire that forced emergency closure of the Sierra and Inyo National Forests. After what doesn’t look like a terribly unpleasant shelter-in-place, the hikers were evacuated by helicopter.

With all of the wildfires around us, you may be wondering: Is it safe to climb in smoke? Climbing has the answer.

But once the air clears, you might be looking for a forest getaway. Well, now that many fire towers have been rendered obsolete due to the increased use of spotter planes, you can rent one for a vacation. Sounds like a great way to isolate AND enjoy big views. But you’ll have to plan ahead, as they get snapped up fast.

If you’re heading up to a fire tower, you will probably be hiking to get there, and Conrad Anker has some hiking tips. We particularly like the idea of gourmand hiking trips. That would really class up the old fire tower.

But, while we do appreciate the luxuries, we still believe in the bringing the basics, too, which is why we noted this take on the modern 10 essentials for any outdoor adventure. Good to know that Cheerios will work as a fire starter (just don’t eat ‘em before you need ‘em!)

Curious about switching your overnight essentials from a sleeping bag to a quilt? Thermarest has thoughts.

Mountain Equipment Co-operative has ideas for hiking with dogs.

And the GAIA blog has suggestions for preserving your phone battery when in the outdoors.

However, that cell phone—even well charged—won’t prevent you from getting lost. Even if you can see the lights of the city below you.

While getting lost off trail is a real worry, getting your climbing rope cut has to be high up on the list of nightmare scenarios. So imagine cutting not one, but two ropes when you dislodge a car-sized boulder. That’s what happened to Foster Denney in El Potrero Chico. You’ll have to read it to believe it!

In addition to avoiding rope destruction (which we heartily recommend), here are ten tips to make any climbing day go better.

You know how else to improve your climbing experience? Learn from other people’s accidents. The latest episode of The Sharp End podcast features Scott Reed from Denver, who took a long fall and ended up self-rescuing all the way back to the car.

Here’s a nifty addition to your self-rescue toolbox: The Petzl Tiblock (pronounced tee-block) is a small device with a variety of uses.

Do you love an epic alpine story? Of course you do! Barry Blanchard offers three of them and shares his favorite moderate ice climbs in Alberta and British Columbia, too. Isn’t all of that beautiful blue ice beckoning to you to dust off your ice tools and sharpen up your crampons?

For even more ice, check out this episode of American Alpine Club’s Cutting Edge podcast, which features Jacob Cook and Bronwyn Hodgins climbing and packrafting around Baffin Island.

If Baffin Island sounds too cold, how about deep water soloing in Vietnam?

Over in Slovenia, some comp climbers have gotten creative during COVID-19 with a deep-water solo-style campus comp.

You know who you don’t want to compete with? Marmots, and other critters, who will eat the radiator hoses and wiring right out of your car.

We also wouldn’t recommend getting between bears and their dinner, but we do recommend tuning in to the webcams at Brooks Falls in Katmai National Park, for all sorts of ursine entertainment as the bears fatten up for the coming winter.

We hope that you’ve been finding some creative ways to stay cool and healthy and well-fed right now. After all, winter really is coming someday—we promise.

2 thoughts on “Climbing in a Time of Coronavirus, vol. 19”