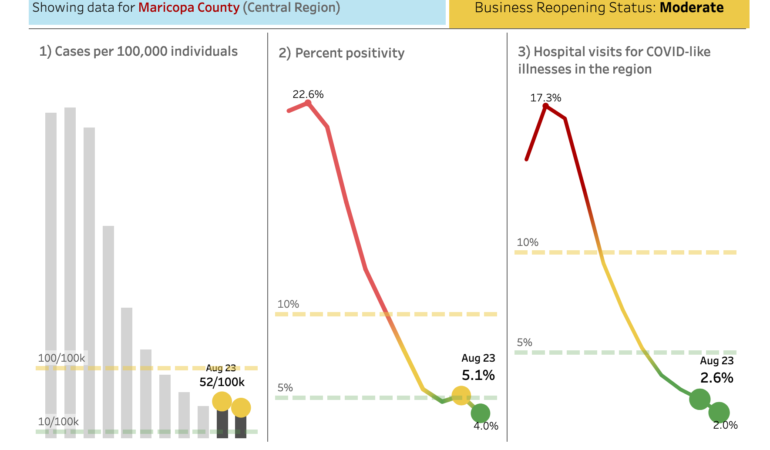 Keep up the good work with masks and distancing. We’re going for the green!
Graphics from www.AZDHS.gov.

We are excited to report that as community spread of COVID-19 has declined to “Moderate” transmission in Maricopa County and the state of Arizona permits an increase in non-essential activities, the AMC leadership is finalizing plans to resume some outdoor in-person activities in accordance with state guidelines. So make sure that your MeetUp account is up-to-date and that you are able to receive email notifications. Indoor meetings and some other events will continue to be online until further notice.

We’ll have more information coming soon, but while we know that this will be a gradual process and that any events will necessarily incorporate masks and other restrictions for a while, we are very much looking forward to actual human interaction with our fellow climbers again (although we’ll have to hold the hugs for now).

Thanks to all who joined us online for our most recent member meeting on September 16, featuring the inspiring and delightful Anne Lorimor, who earned herself a place in the Guinness Book of World Records last July when she became the oldest person to summit Mount Kilimajaro at the age of 89. Her secrets include regular training, eating your veggies, and not drinking too much coffee. Based on our conversation, it sounds like Anne still has many more mountains to climb.

The next online member meeting on October 28 will feature legendary Arizona climber Jim Waugh, who has put up first ascents all over the state, including his now-classic routes up the even more legendary Baboquivari Peak. For this discussion, Jim will talk about his experiences on Babo, one of the few mountain summits in Arizona that can only be reached with technical climbing. Don’t miss it!

In the meantime, if you’re seeking indoor thrills, Black Rock Bouldering in Phoenix is once again open for members and punch-card holders.

To give you some inspiration, Olympic-qualified Team Canada climber Sean McColl has put together some drills for improving your footwork.

In sadder news, we were startled to read about a freak accident in Wyoming’s Wind River Range on September 5 that killed experienced climber Jeanette Heung, who died in the Cirque of the Towers after rockfall sheared the slings to which she was anchored.

Down here in Arizona, it looks like La Niña has arrived on the weather scene, which means that winter (whatever that is) may mean continued drier weather. It should, at least, cool down eventually. Somewhat.

If you’re taking advantage of that (slightly) cooler weather to adventure close to home, you can learn more about the plants you see and also do some citizen science at the same time by joining the Metro Phoenix EcoFlora Project, which uses the free iNaturalist smartphone app to gather information about what kinds of plants are growing across the Phoenix area. We suspect this would also be handy for entertaining home-schooled kids, should you have any of those lolling about.

Or do some good for the climbing community with the Central Arizona Bolt Replacement Project. They’ve been doing great work re-bolting climbing areas around Phoenix, including at the Pond and Atlantis, and are now undertaking work to update the approach trail to Atlantis. (What? They don’t like rapidly-eroding, thornbush-lined, poorly-marked trails with random rockfall? Go figure.)  If you’d like to support their work, they are gratefully accepting donations and volunteer help.

Another trail worth supporting is the Arizona Trail, and October 10 marks the annual “Arizona Trail in a Day” event, which gathers hikers, bikers, and equestrians to collectively traverse the entire 800-mile AZT trail in, yes, one day. The event also serves as a fundraising opportunity for the trail, and AMC member Rebeca Rodriguez is leading her own campaign for the cause.

Along the AZT, the Silver Bridge on Bright Angel trail has been stabilized after recent damage and, following a structural assessment, has re-opened for Grand Canyon hikers.

The AMC’s 30th Grand Canyon Over-the-Rim Clean-up will not require use of the Silver Bridge but, as we reported in our last post, it will be going ahead on September 26 & 27 with about 25 participants divided into three socially-distanced teams.

For a Grand Canyon exploration that does not require a trash sack or even hiking boots, check out the Canyon Brats podcast, which explores all things Grand Canyon, from geology to mining to heat exhaustion.

North of the Canyon, The Peregrine Fund conservation group will release up to four young California Condors at Vermillion Cliffs at 11 a.m. Saturday, Sept. 26 as part of the ongoing effort to rebuild the wild population of these amazing birds. While the annual condor release is usually open to the public, COVID-19 restrictions mean that bird-lovers can instead watch the release virtually on The Peregrine Fund’s YouTube Channel.

Across the country, AMC member Mitch Doty claims that he was not involved, but a group of New Hampshire climbers took to the skies to share their message of inclusion and solidarity with a day-long “Canoelian Traverse” at the popular Cathedral Ledge climbing area.

Over in D.C.—or theoretically in D.C.—the American Alpine Club and Access Fund’s annual Climb the Hill advocacy effort has had to go virtual this year, but the upside is that the online format gives more people a chance to get involved. Register in advance for access to panel discussions on Sept. 23 and 24 about public lands, diversity and inclusion, and more.

Public lands and the things that threaten them are also the subjects of the new Patagonia Films new production Public Trust: The Fight for America’s Public Lands, which was produced by Yvon Chouinard and Robert Redford and debuts on September 25 on YouTube.

Access Fund is continuing the conversation about toxic route names by asking some individual climbers to give examples of when and why they have found specific route names harmful and by suggesting what the climbing community might do about it.

Mountainfilm festival continues its virtual tour, and you can buy tickets to watch upcoming shows on dates throughout the coming weeks, with the next one scheduled for Sept. 26.

The newest short film in the American Alpine Club’s Legacy series celebrates the long and diverse climbing career of Betsy White, who started climbing in 1955 at age 17 and has gone on to climb in over 60 countries, including extensive explorations in Pakistan, where she was stationed during a stint in the Peace Corps.

If you’re planning trips for yourself, The Mountaineers has advice—including a free webinar—on using the CalTopo online service to make custom maps and even to track local conditions.

And sure, Arizona is still hitting 100+ Fahrenheit most days, but up in Montana, they’re already putting up new ice and mixed routes.

So you might as well start training for ice and mixed climbing!

For new ice climbers, Gripped has compiled 10 tips to get you excited about the coming winter.

And if you’re not so excited about the “winter” part of winter climbing, then here’s some advice for how to make ice climbing better, safer, and warmer.

On the other, hand, if you want to really commit to the chill, why not go climbing in Siberia?

Climbing ice is one thing, but we do NOT recommend climbing icebergs. (Spoiler: they roll!)

But, of course, icebergs are melting. As are the glaciers of Kilimanjaro, where Will Gadd climbed some remarkable snow fins in 2014. He recently returned to see what had happened in the intervening six years.

If you’re planning to seek snow for yourself this winter, Backcountry Access has some great ideas for using the off season to practice locating your avalanche transceiver or beacon. While we like the idea of hiding a transceiver in tall grass, does anyone else have nightmares about accidentally finding a rattlesnake instead? [No? Just Ann, then.]

Dreaming of the Himalayas? The newest Uphill Athlete podcast features Monica Piris, who serves as basecamp doctor for Mount Everest, Cho Oyu, and Manaslu and has plenty of advice about health and illness at the higher altitudes.

Or you could skip all of that cold and snow and join Pete Whittaker of the Wide Boyz, who noticed that there is, in fact, a crack section on Adam Ondra’s 5.15d route Silence. So he decided to see if he could find any usable jams in that crack. Any jams. At all.

If you’re in need of either armchair adventures or audio entertainment for the drive to a real-life outing, check out The Adventure Podcast series, in which filmmaker Matt Pycroft speaks with a wide range of people who thrive on exploration and discovery, such as in episode 45, which features Sir Charles Bodington, who is still climbing in his 9th decade.

Whether your outdoor gear has been underused or overly abused during the past few months, Sea to Summit has great tips for how to clean, fix, and store it so it’s always ready to go.

As we seek adventure outdoors, this essay by a reformed wilderness-poaching mountain biker offers an interesting perspective on what we should and shouldn’t do in wild places—and why.

Meanwhile, Rock and Ice Magazine revisits the essay “Games Climbers Play” written by Lito Tejada-Flores in 1967. This thought-provoking consideration of climbing ethics is definitely worth a read, as it reminds us that the only rules in climbing are the rules that we make.

And THIS is a climbing game we can all get behind. The game, which challenges players to gain skill points, gather booty, navigate weather hazards, and be the first to send a 5.15, launched on Kickstarter mere weeks ago and was fully funded in one day. 5.15 has already moved into production and preorders are being accepted now.

So, if we’re coming out of isolation, then we guess we need a new sign-off here…

Venture on (carefully)!
Ann and Andrea