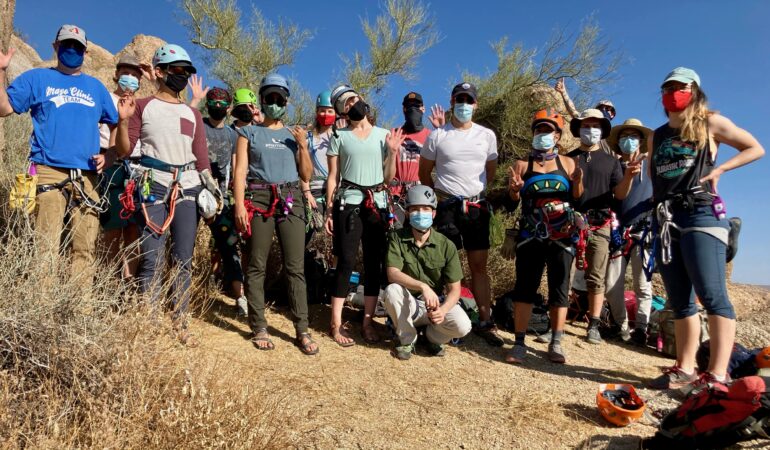 May we present: the intrepid AMC Basic Rock Climbing Class of 2020!
photo by the equally intrepid Scott Nagy

Well, it looks like the predicted autumn surge in coronavirus cases, in fact, surging. As of this writing, the case counts are quickly approaching the highest levels we’ve seen so far in Arizona and 90% of the ICU beds in local hospitals are filled. So be careful out there.

Before the pandemic situation got to its current state, we were able to squeeze in a couple of very successful schools, including BORC and Anchors, as well as completing the Queen Creek Clean-up, where club members picked up 20 bags of trash, two tires, one safety cone, and a very large cooler along our adopted section of U.S. 60.

And our November 18 meeting was extra-special, as four AMC members told stories of some of their most memorable outdoor adventures and misadventures. Aaron, John, Ann, and Scott (K.) shared epic tales that took us from Patagonia to the Canadian Rockies to the Colorado Rockies and down into the Grand Canyon. Thanks to all for a great night around the virtual campfire.

Join us (on Zoom!) for our last member meeting of the year on Wednesday, December 9 at 7 p.m. as we look back at the highs and lows of 2020, celebrate some special club members, and, yes: VOTE! on the 2021 budget.

But right now, as we prepare for an almost-certain return to pandemic-induced isolation, we’ve got a great selection of diversions for you.

Since we brought up misadventures, the American Alpine Club’s 2020 edition of Accidents in North American Climbing (a.k.a. “Andrea’s favorite way to learn from other people’s mistakes”) has just been shipped to members and is now available for general purchase as well. Alert readers will note that Arizona’s reports include one from former AMC member Chris Czapliki, who also chronicled his Mount Lemmon mishap on his blog. (He has since recovered, we’re happy to say.)

Feeling stressed wondering what will happen as the pandemic drags on? Us too! However, psychologists have some suggestions for how we can navigate uncertainty by shifting your mental focus outside ourselves through acts like cultivating a sense of awe (Grand Canyon webcam?), building a sense of purpose (maybe contribute to a citizen science project?), or expand your social connections (volunteer for the AMC board!).

In addition to mental health, you know we believe in physical health. So if you need encouragement to keep up those strength training routines, here’s a summary from Outside Online outlining the benefits. (Good news: bodyweight exercises confer the same advantages of pumping iron!)

And don’t stress about building a perfect resistance workout routine. Just trust your feelings and you’ll get great results. (Unless your feelings want to stay on the sofa all day…)

This indoor training routine was created in April when most gyms were closed. But it seems quite relevant again.

Of course, we can social distancing outdoors, too. And this autumn has seen some incredible feats in the outdoor climbing world.

Over in Yosemite, Emily Harrington joined the small club of people who have free-climbed El Capitan in a day—and became the first woman to do so via the Golden Gate route.

El Cap also saw a new speed record on the Muir Wall, when a team of three climbers finished the route in 12 hours and 7 minutes.

And there’s a new route on the Emperor Face of Yuh-hai-has-kun (Mt. Robson) in the Canadian Rockies.

In Nepal, however, the COVID-19 pandemic has shut down Mount Everest—and the Nepalese economy that depends on it.

For those sorts of people who enjoy tying ropes together and also enjoy data (Hey, do we have any engineers in the AMC?), check out this discussion about joining two ropes for canyoneering and rappelling purposes.

If you find yourself trying to navigate in a situation of low visibility (fog, duststorm, etc.), here are some tips from the UIAA. Or ask Ann about what she christened “smoke-out navigation” after an encounter with dense wildfire smoke.

Thinking about trying ice climbing this winter? Well, heed the advice from a top ice-climber to beginners: “Don’t Ever Fall.”

We suspect Mitch Doty might have secretly written this article to lure us all out to climb ice with him in New England.

There is also ice climbing in Zion, although it doesn’t sound exactly beginner-friendly.

With climate change threatening ice climbing and other winter sports, Graham Zimmerman describes how he has become an Imperfect Advocate for winter.

In addition to the danger that climate change poses to outdoor sports, outdoor recreation magazines are also feeling the crunch from the pandemic economy. Powder Magazine is going on hiatus—possibly forever, and only has a couple issues left to print.

Do you have climbing goals? Turns out it might be healthier and more effective to focus on the climbing process instead.

In a real-life example of how goals can go awry, Fred Campbell was on track for a career as a professional football player when a sudden injury derailed his life… and led him to climbing.

Brandon Leonard, of Semi-Rad, suggests that one way to enjoy the process is to look for the no-star routes. They might just surprise you.

On the other hand, there are some truly scary things on a climb that would really deserve a no-star rating.

But what motivates us to get outside at all? For a group of friends in Sitka, Alaska, it’s all about exploring together and learning to care for the environment around them. The snowboarding and skiing along the way is somewhat incidental.

Whatever you do outdoors, are you ranking it on the Fun Scale? Kelly Cordes now does.

For more conversations about what climbing means on a personal level, check out Kathy Karlo’s For the Love of Climbing, including a recent episode featuring Drew Hulsey talking about body positivity and climbing.

Going in the opposite direction from Kathy’s warm and thoughtful interviews, the team behind “Brutally Honest” videos has produced a, well, brutally honest (and somewhat potty-mouthed) primer on national parks.

And for some home-based fun, check out this downloadable coloring book about prehistoric life in our national parks. It says it’s for kids, but aren’t we all kids at heart?

Here’s a mystery for you: A kind and handsome hiker ditched his old life and headed south on the Appalachian Trail. He made many friends along the way, but died alone in a Florida swamp. Why? And how? And, most curiously of all: who was he? (Hat tip to Scott Kuchman for a truly fascinating read.)

Another compelling mystery turned up this week at the bottom of a Utah canyon. Could be aliens. Could be art.

For a complicated story closer to home, author and illustrator Lauren Redniss has produced a richly researched book about Oak Flat and the fight to either preserve it—or mine it.

A follow-up: Remember Garrett Madison, the American guide who was being sued by a client for calling off an attempt at Everest? That lawsuit was dismissed, as Garrett discusses in a recent audio interview.

With so many of our own expeditions (large and small) cancelled this year, we’re happy to report that one of our favorite vicarious adventure festivals is still on—albeit in online form: Reel Rock 15 can be streamed direct to your living room from Dec. 11-14.

And with that, we’ll leave you to read, watch, train and (maybe, carefully) climb on.

2 thoughts on “Climbing in a Time of Coronavirus, vol. 22”