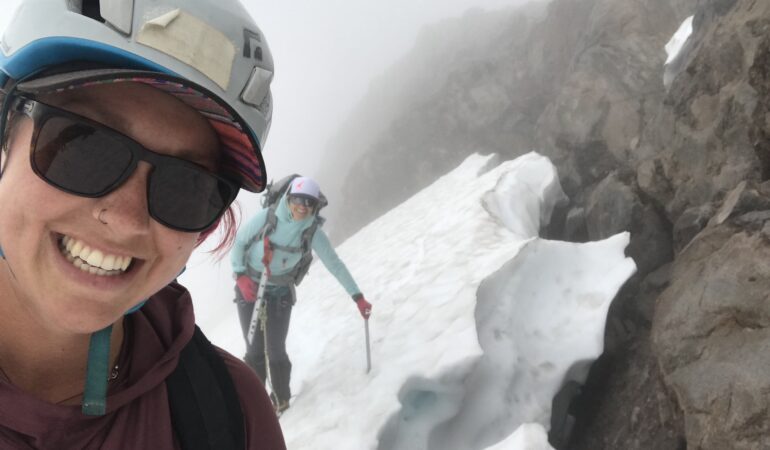 Ashley Saupe hosts The Sharp End podcast for the American Alpine Club and will be our featured speaker on March 24.

Happy first week of Spring! We bring good tidings, as the COVID-19 case counts continue to drop, vaccinations increase, and Maricopa County inches closer to Stage 2, which means we are (tentatively) planning spring schools and some in-person events. Stay tuned to MeetUp for announcements as soon as we get the go-ahead from the AZDHS.

However, we hope to see everyone TONIGHT at our online March member meeting, which will feature the fantastic Ashley Shaupe, host of the excellent podcast The Sharp End (Andrea’s favorite podcast, of course) in which Ashley interviews outdoor adventurers willing to share lessons about what happens when things to wrong. Sign up on MeetUp to get the link and we’ll see you at 7 p.m. sharp! (Pun totally intended).

Speaking of things going wrong, the ice climbing season in Ouray ended with a bang this year, when a large boulder crashed down through the canyon and destroyed both an access bridge and, even more seriously, the pipeline that supplies both the Ouray Ice Park and the country’s oldest functioning hydroelectric plant. The good news: no one was injured and there were only a few days left in the season anyway. The bad news: it’s going to be a very difficult, very expensive fix.

And here’s your regular reminder that accidents can happen even close to home. An area hiker ended up in critical condition last month after falling on the Hole in the Rock trail at Papago Park.

If you’ve been itching to get over to Four Peaks, the Forest Service has lifted the closure order put in place after the Bush Fire last year. But there are still plenty of hazards, so proceed with caution.

Anyone do any nice hikes lately? Sean Villanueva Driscoll did, too. He went out for a little birthday stroll… and completed the Reverse Fitz Traverse. Solo.

Hear the whole story from Sean himself in a recent episode of The Runout podcast, hosted by Andrew Bisharat and Chris Kalous.

Conrad Anker, meanwhile, says that at age 59 and after recovering from a 2016 heart attack, he’s done with the big expeditions.

But there are still plenty of barriers for other climbers to break, and Lor Sabourin, who was the guest speaker at our February Member Meeting, has become the first non-binary climber to send 5.14a trad, rocking up Sedona’s East Coast Fist Bump.

For more of Lor’s impressive feats, read their account of a recent send on Cousin of Death, a 5.13+ in Northern Arizona.

Further away, after a financially devastating year without tourist income, Nepal is again issuing permits for Mount Everest and anticipates at least 300 foreign climbers to arrive next month, all of whom must quarantine for a week and have a negative COVID-19 test.

Unlike the world’s highest peaks, the summit of Nepal’s Machhapuchhare “is not meant to be stepped upon; it is only to be adored by the eyes.” Put another way: it’s illegal to climb to the top.

However, if you’re a stickler for details, you might note that many folks who claim to have summited several 8000m peaks haven’t quite done what they think they’ve done.

Not sure we’d take this collection to the high peaks, but the North Face has announced a new collaboration with… Gucci?

Sure, the spring weather is a pretty great invitation to go outside and explore high places, but if you need a day off to curl up with a good book ABOUT the highest of places, you’re in luck. Mountaineer and journalist Ed Douglas has a new book out: Himalaya: A Human History.

And Netflix has just announced that it will distribute a soon-to-be filmed biopic based on Ed Douglas’s biography of Tenzing Norgay.

For a great online read, AMC member David Cameron (thanks, Dave!) pointed us to this story about some totally awesome women who were finding adventure by climbing mountains before they were even allowed to wear pants.

This story of encountering three storms on the same mountain remind us why we always ought to pack some extra snacks.

And here’s a fun little remembrance of Fred Beckey… and his sleeping bag.

Want to eavesdrop on a seriously inspiring conversation? Listen to Adam Ondra and Tommy Caldwell chat for a whole hour about big wall climbing (and much more).

Or, for a serious look at one of the darker sides of professional climbing, check out LIGHT, Caroline Treadway’s debut documentary that features Angie Payne, Emily Harrington, Andrea Szekely and Kai Lightner talking about how climbing led them into — and out of — eating disorders. The 46-minute film is available for free on YouTube.

As always, we’ve rounded up some great articles and videos to boost your skills.

Let’s start with this in-depth analysis of the strength of ice anchors.

And another about the dynamic loading of ice screws.

Here’s a fascinating written discussion about the reliability of “floating” a.k.a. “self-equalizing” anchors (this is written from a rescue standpoint, but the concepts apply to climbing as well).

And a useful idea about when and how to use a “J-loop” to close the rappel system for multi-pitch descents.

For sport climbs, here’s a nifty tip about how to fix a loose bolt with locktite and a small wrench.

Store these ice climbing tips away for next winter.

Matt Samet shares 8 pieces of advice for new (and not-so-new) rock climbers that he wishes someone had given him 30 years ago.

And no matter how experienced you are, you can still improve your climbing efficiency. Bishop-based guide Si Moore offers specific strategies for training mind and body for better movement.

Headed for higher elevations to seek out a little more snow time?

Well, the mountains are no less dangerous in the spring, so Semi-Rad has put together a poem to remind us why avalanche safety is always important.

Although avalanche training mostly focuses on finding and digging out victims, that’s only the first part of a successful rescue.

But on high or low ground, if you find yourself outside in the dark without a compass or GPS, don’t forget that you can navigate by the stars.

And while you’re out wandering in the woods, you might need to poop. (Everybody does it!) So please do it properly.

You know who else poops in the woods? That’s right.

And after a year of isolation that might have put a dent in our fitness routines, we have yet another reason to envy bears, who apparently don’t lose muscle mass or bone strength after hibernating all winter. What a cool adaptation.

And that leads to an important question for high-elevation adventures: Is it the altitude, or are you just out of shape?

If it’s the latter, then we’ve got the workout for you! Favia Dubyk has put together a new routine, all focused on mastering one of the most useful but challenging climbing exercises: the pistol squat.

One last thing before we go: If your spring-cleaning turns up some climbing carabiners that are ready to retire, don’t throw them away — recycle them.

Climb on (out of hibernation)!