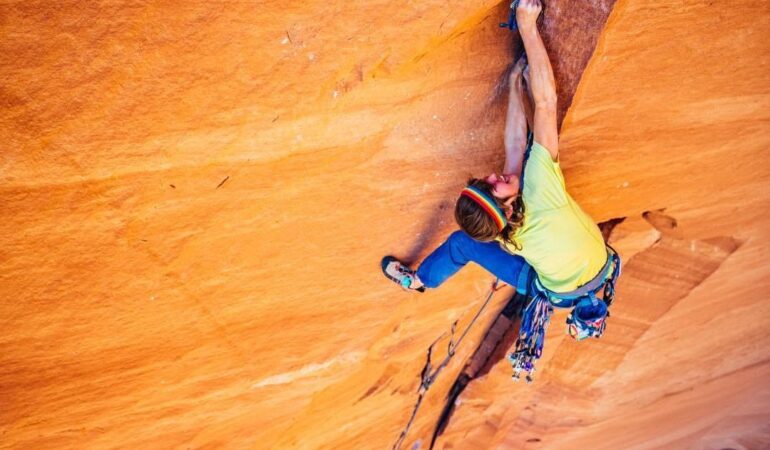 Lor Sabourin is the lead trainer for Warrior’s Way and will speak about developing mental agility at the AMC’s February 24 member meeting.

Here’s to… whatever the new year brings.

We hope that you were all able to enjoy some holiday fun with friends and family, whether virtual or in person (albeit distanced). And, while we wait for our turn to be vaccinated, we’ve compiled an assortment of mountain news, couch-side adventures, workout suggestions, and sundry amusements.

First up, while the AMC has again had to halt in-person outings, we have some great new virtual outings coming up. Chris Adams is hosting an online clinic about Top-Down Belays on Feb. 9, Erik Filsinger will be leading a virtual ice climbing tour of Southwest Colorado on Feb. 10, and on Feb. 16 Bruce McHenry has a virtual outing to Prescott’s Time Zone Wall, which is a great spot for new climbers and recent Anchors grads to build their skills. All of those events are free to AMC members.

Our next online member meeting on Feb. 24 will be a real treat, featuring guest speaker Lor Sabourin, who is the Training Leader for The Warrior’s Way discussing how to develop mental agility for climbing and life. Sounds like exactly what we all need right now!

Lor is also leading an online clinic on Feb. 25 to work directly with those members who want to learn practical exercises to use to learn to focus attention and develop a healthier relationship to fear (which applies both on and off the rock) and how to use body awareness to climb more effectively.

See the full line-up of upcoming club programs on our MeetUp page.

And here’s something fun: check out the January edition of Arizona Highways magazine, which focuses on the Grand Canyon and features a fantastic article about the AMC’s 2020 Grand Canyon Over the Rim Clean-up. Kudos to Deborah Roether for reaching out to Arizona Highways and making this happen!

Speaking of Arizona Highways, if you need more reasons to love the Grand Canyon state (other than January highs in the 70’s), the magazine has teamed up with The Phoenix Symphony and Dierks Bentley to record a love letter to Arizona.

Out in the rest of the world, there have also been some impressive mountaineering feats recently. The first successful winter ascent of K2 was, fittingly, accomplished by a team of Nepali Sherpas on January 16. This was the only remaining 8000m peak that hadn’t seen a winter ascent, and was heralded by many as the last remaining major mountaineering feat. Sadly, however, that day on K2 also saw loss, when the Spanish climber Sergi Mingote fell to his death while climbing near Camp One with a separate party.

Closer to home, we extend our condolences to the friends and family of Marylee Harrer, longtime rock climber and Arizona native, who climbed as one of the legendary Arizona Banditos in the 1970’s and achieved the first female ascent of the Grand Canyon’s Mt. Hayden in 1979. Marylee died in Montana at the age of 63 on December 21, and is remembered by her daughter Amylee Thornhill in Climbing’s tribute to climbers we lost in 2020.

As the pandemic continues to rage on, we know many of us are feeling a renewed sense of isolation, so we offer some inspiration from Antarctic explorers on handling loneliness.

Not quite a polar experience, but we have finally moved into something resembling winter. So, now that Arizona’s snow country finally has some fluffy stuff, remember that you can check on the snowpack in Flagstaff’s Kachina Peaks before planning your next adventure. And, snow or no snow, you can always drool over the new backcountry skis of 2021 (that might just be Ann).

If you want to boost your winter backcountry skills, check out Arcteryx’s 2021 Digital Backcountry Winter Academy, held from Feb 8 to 12.

For more on traveling safely in winter, Bruce Tremper, author of Staying Alive in Avalanche Terrain, was recently interviewed for Gaia’s Out and Back podcast.

And this video from Gripped offers a reminder about why every skier needs to take avalanche risk seriously.

Of course, the best way to avoid an avalanche is to avoid traveling in avalanche terrain. But that’s where the best skiing is! So, here’s a quick reminder of how to minimize risk.

One option for keeping yourself safe in avalanche terrain is to use an airbag pack. But maybe you’ve heard they’re really heavy, or that they lead to skiers making riskier decisions? Those might be just myths.

If you’d rather enjoy wintry fun from your couch, check out The New Kid, which follows Savannah Cummins on her first expedition. In Antartica. Go big or go home, right?

And here’s an interesting story that combines survival and the start of the heliskiing industry in Canada.

No heliskis, but plenty of adventure as these blind skiers explore the backcountry British Columbia.

Here’s a bright spot in the dark news of COVID-related closures: Chicks Climbing and Skiing is back, with new ownership and a roster of ice climbing outings in time for winter!

Whether with guides or on your own, if you’re heading out to bash your way up a frozen waterfall this winter, you might want to know what sorts of gloves are best for ice climbing.

And do you know how to layer? No, we don’t mean how many layers of tasty spreads you can put on your sandwiches. [Editor’s note: Put them all on. You’ll need the calories.] We mean how to layer your clothes to stay warm and dry outdoors, whatever the weather. Here’s the short version (fair warning: all the temps are in Celsius) and a longer discussion.

Hey, have you ever wondered how waterfall ice is impacted by weather?

Or, if you want to take a deep dive into crevasse rescue (no pun intended), check out this video from Doug Latimer.

Skiing the “Death Couloir”? Umm… Even Ann is skeptical. But it does look like an exciting trip in the Sierra Nevadas.

Speaking of big mountains: Mount Everest just got taller! After collaborating on surveys, China and Nepal have jointly confirmed that the summit (which does shift due to geologic forces) is currently 29,032 feet, or 8,848.86 meters tall.

Not sure how you measure a mountain? Canadian Geographic explains.

Back down here in the Phoenix area, we have some new rock climbing options, as Marty Karabin just released a new map for routes in the Wildlife Canyon area of South Mountain. There are 40 new routes ranging from 5.3 through 5.12a, most of which are sport, with a few trad cracks and mixed routes, plus three aid routes rated A0 and A1. Pick up a copy at Arizona Hiking Shack, Phoenix Rock Gym, Focus Climbing Center, or your usual Marty Map supply center.

And to get yourself psyched, meet a woman who just went climbing for the first time — at age 99!

On the other hand, we also offer a don’t-do-this climbing warning in the form of this terrifying weekend whipper. Yikes!

Need to brush up those climbing skills? If you’re a bit rusty on belaying with the munter, or tying off with a munter mule overhand, we offer this refresher video from the AMGA.

Rock and Ice offers an article on building rappel anchors in a pinch.

And here’s a primer on mechanical advantage. Useful should you need to haul a buddy out of a crevasse, or maybe even give your partner a boost up the start of Cryin’ Dino.

But what would be a blog post without some fitness tips? Dust off your hangboard, because we’ve got three weeks worth of training strategies for you: 1, 2, and 3.

Or maybe you want to work on your hip mobility instead? Yoga is just the thing to help with your high steps.

If you’re a female athlete, you probably want to watch the new series from Uphill Athlete.

And if you need some inspiration to keep up with that fitness routine, check out Sarah Hueniken’s recent accomplishments of climbing all six of the very hard mixed climbs at the Haffner Cave. In the same day.

Want some alpine adventures? Watch this classic of Steve House and Marco Prezeljs in Peru.

For your reading enjoyment, the Access Fund has released the Fall/Winter edition of their Vertical Times magazine as a digital issue. Stories include updates on campaigns to preserve climbing access on public lands across the country, the ongoing discussion of route names, plus ideas on how to reduce the impact of congestion at popular crags.

And remember that hiker mystery we shared in our previous blog post? Well, the mystery has been solved.

Here’s some citizen science that is just made for staying home (although you may need to get up from your couch): The Great Backyard Bird Count is coming up Feb. 12-15.

Finally, congratulations to AMC member and champion of the outdoors, Rebeca Rodriguez, who was just awarded the “Earth Angel” award from the Arizona Women’s Climbing Coalition in their Lady Beta Awards. Watch the LBA interview with Rebeca on IGTV in which she discusses her passion for outdoor advocacy and stewardship. Congratulations, Rebeca!

And we’ll leave you with another climbing debate. Do you attach your tether to your tie in points, or to your belay loop? We expect heated discussion in the comments.

1 thought on “Climbing in a Time of Coronavirus, vol. 23”