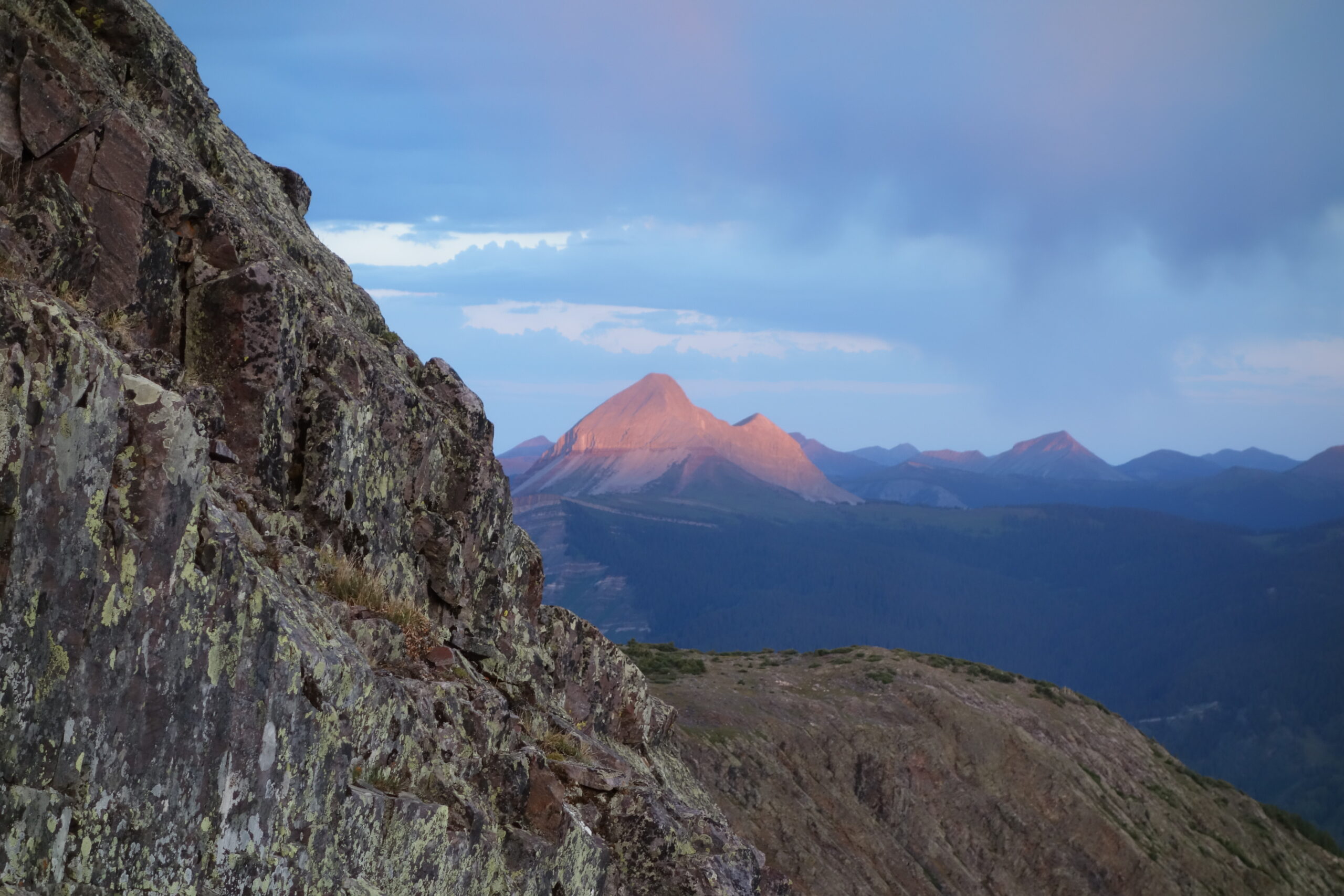 It’s a good time to visit Colorado’s high peaks. This is the West buttress of Snowdon Peak, with Engineer Mountain in the distance. Photo: Ann Revill.

Welcome to August! The local weather is threatening to set all sorts of records and the average temp in Phoenix in July was 99˚F. That’s the average for the whole month, BTW, not average daily high (which was 110˚F). And to add insult to injury, the monsoons seem to have abandoned us.

So, um, how hot is too hot for human survival? (Asking for a friend.)

So what can we do to avoid the summer heat AND the novel coronavirus? Well, short of running away to a small island off the coast of Maine [Editor’s note: this was Andrea’s solution], you can join some of our great virtual events. We’ve continued to add more online skills clinics to the roster and have transformed our upcoming member meetings to an online format as well. Check the schedule on MeetUp and make sure your MeetUp account is sending you notifications!

But for some outdoor fun, may we suggest that you take advantage of the (slightly) cooler nighttime temperatures here in Arizona and enjoy the Perseids meteor shower, which will peak August 11 and 12 this year.

While you’re out there, why not try your hand at some night photography?

As far as night photography shots go, this one is probably once-in-a-lifetime (because Comet Neowise won’t be back again in our lifetimes).

Even though Neowise has moved on, COVID-19 is still with us, of course, and masks are going to be needed for the foreseeable future. So Outdoor Research, which is now making N95 masks for the healthcare community, has some tips on how to climb safely and socially, even while masked.

And we may be able to do some of that climbing at our local gyms again soon, because Arizona climbing gyms now have a path to reopening.

While we’re on the topic of gyms, here’s a tantalizing possibility: can climbing chalk help stop the spread of COVID-19?

Back outdoors, as we’re sure you’ve heard (or experienced firsthand!), Arizona’s outdoor recreation areas have been seeing very high use this summer. Unfortunately, with this increase in visitation, has come more trash. So pack it in, pack it out!

One place that shouldn’t be seeing any visitors at all right now is Mount Lemmon. Our friends at CASA remind everyone that, although the Catalina Highway has reopened, most of the recreational areas on the mountain and in Sabino Canyon are still off limits following the Bighorn Fire. And yes, tickets are being issued.

But why? Well, just look at that burn scar.

Instead, you could escape the heat among Colorado’s high peaks. With 53 fourteeners (mountains with a summit elevation above 14,000 feet), across the state, there’s a whole world of adventure just a day’s drive away.

While many of the 14ers can be summitted with “just” a hike, Colorado’s mountains do offer technical climbing routes at all levels—and for all speeds. Wade Morris and Stefan Griebel have “casually” set a new fastest known time on the Casual Route on Long’s Peak, making it car-to-car in just 3 hours, 53 minutes, and 59 seconds. That includes 10 miles of running and 5000’ of vert, including 7 pitches of technical climbing, outfitted with 5 cams, 6 carabiners, two quickdraws, and two Microtraxions. The crux is either the 5.8 squeeze, or the 5.10- pitch, depending on who you ask.

In another speedy endeavor, Alex Honnold and Tommy Caldwell linked up 11 classic climbing routes in Rocky Mountain National Park (including the Casual Route) in a single 36-hour push. They also brought minimal gear, but could maybe have used a bit more. Apparently, they climbed the first night by the light of their phones.

Longs Peak was, however, also the site of one of two recent climbing deaths in the western U.S. On July 30, Dillon Blanksma fell from the Broadway Ledge and, mere days later, in an unrelated incident, a climber died in a fall from Humphreys Peak in California’s Sierra Nevada.

In the sport climbing world, Alex Megos has just sent his project Bibliographie, in France, which may be the world’s second 15.d.

We bet Alex was pretty stoked for this send. But have you ever wondered where lingo like “stoked” comes from?

Also, are we the only people who wonder how you would even BOLT a 15.d? Adam Ondra explains.

Meanwhile, Canadian climber Sabrina Chapman has been charting her own path to elite grades. The new short film Titan, which chronicles her effort to climb her first 5.14a, was funded through a Kickstarter campaign and will premiere on Sunday, August 16.

All of us who enjoy sport climbing—at any grade—have, among other people, Armando Menocal to thank. Locally, Armando earned some gratitude when he stood up for bolting in the Superstition Wilderness in the 80s and 90s, and along the way, started the Access Fund. He has since moved on to developing sport climbing in Viñales, Cuba. Due to challenges he faced there, he has gone on to create Accesso PamAm, which advocates for climbing access in Latin America.

In less happy climbing news, we are sad to report that Chicks Climbing and Skiing, which has been a leader in empowering women through outdoor education for more than twenty years, has decided that their business model can’t survive COVID-19.

Meanwhile, Flash Foxy lives on, but they have cancelled the 2020 Women’s Climbing Festival Chattanooga that was scheduled for this fall.

The Arc’teryx Climbing Academy, however, is going digital this year. During the August 24–28 festival, there’s lots going on, including a panel discussion on inclusivity in climbing moderated by Flash Foxy founder Shelma Jun, plus the premiere of Free as Can Be, Samuel Crossley’s new film about a climbing friendship that unites two generations around the goal of free-climbing Freerider.

For our own virtual climbing adventures, we [meaning Ann] are currently dreaming of snow and ice.

This is, after all, the time of year when many alpine routes are in top form (albeit not in Arizona). If you’re new to mountaineering, Thermarest suggests five “starter” peaks.

And Vertical Addiction has 10 tips for alpine beginners.

What sort of gear would you take for a single-day alpine climb? The team at EpicTV discusses some options.

And AMC’s own Bruce McHenry will be introducing everyone to ice climbing basics in a new online skills clinic on August 18.

Unfortunately, global climate change is impacting our ability to recreate safely in the high alpine. As the UIAA explains, it’s even affecting rockfall in the Couloir du Gouter at Mount Blanc.

If you hear “alpine” and think “skiing,” then cool off with this video highlighting Andrezej Bargiel’s first ski descent of K2 in 2018 (a.k.a. “the impossible descent”).

For any outdoor activities, if you use a GPS watch to track your time (or track yourself!), you may have noticed that the accuracy varies. The Training Peaks blog discusses factors that may influence those readings.

Speaking of gear, here’s a quick but important note: if you have a Petzl low stretch kernmantle rope, you should inspect it for possible damage.

Distance hikers and backcountry adventurers know that when things go wrong, you may end up relying on the help of relative strangers. But they won’t be strangers for long.

But, of course, the first option is to be able to rely on yourself. You know what helps? Core strength! C’mon, you had to know we were due for a new core workout. Here’s a great one from Rock and Ice that uses Pilates-inspired moves to get strong for climbing (and life).

Finally, we’ll leave you with yet another reminder to take care of yourselves. And that means don’t overdo that core work! The Uphill Athlete blog suggests that arduous exercise is also a form of stress and, as such, can impact immune function.

So, look after yourselves, stay healthy, and tell us what you’ve been up to!

Isolate On! (Possibly on a small island)